Welcome to the BIOX Pre-ICO

Blockchained Internet of Everything (BIOX) is launching world’s first decentralized registry of Internet of Things (IoT) devices, and using a stepped Initial Coin Offering (ICO) to fund the project. At present there’s no token or coin on any of the crypto exchanges that tackle the vulnerability problems of IoT. A recent study found 70% of IoT devices are vulnerable to attack, and each device averaged 25 vulnerabilities per product. These vulnerabilities are basically attributed to how the IoT devices connect to the centralized cloud.

BIOX Pre-ICO is a one¬time opportunity to become a part of Blockchain driven decentralized future of $19 Trillion IoT / Internet of Everything (IoX) economy. Join the IoX revolution and help us create an open registry for the billions of IoT devices across the world so that these IoT devices are potentially rendered hack proof, safe and secure.

Short for “Open Registry for Internet of Everything,” ORIOX uses a blockchain protocol for instant P2P authentication, smart contracts, and unlimited scaling. ORIOX prepares billions of IoT devices that are already out there for 128-256 bit AES cryptographic encryption. Our goal is to revolutionize the rapidly evolving multi-Trillion IoT industry. Our vision is to create a fully integrated and trustworthy global open registry for Internet of Everything (IoX), which can be scaled up to not only authenticate and establish the authenticity of the registered devices / objects / things, but allow them to be safely, securely and directly traded, rented, or leased between peers with smart contracts. See www.slock.it

According to Juniper Research there were 13.4 Billion IoT devices in 2015, will be 38 Billion by 2020. Cisco predicts 50 Billion IoT devices within a decade. These estimates do not include the multitude of NFC and BLE tags out there tracking pets and consumer goods that connect them to the Internet. When myriad of devices / things connect & communicate in an autonomous way, it’s clear that the age of IoT presents security concerns in ways that seemed unthinkable just a decade ago.

“If it connects to the Internet, it´s vulnerable to attack” is the maxim we have come to live by, leaving IoT in a catch 22 situation. Current centralized systems render 70% of the IoT devices vulnerable, that’s about 35 Billion devices in the next 5-10 years, an awful lot to be protected. Experts estimate that it would at least take 149 trillion years to crack a 128-bit AES key. That’s how secure blockchain is.

IoT and blockchain: a match made in heaven?

There seems to be a universal consensus that the answer to that question is YES. IBM and Samsung recently presented a proof of concept for ADEPT (Autonomous Decentralized Peer-to-Peer Telemetry), which uses the blockchain to build a distributed network of devices – a decentralized IoT providing a secure, low-cost way for devices to interact. “IoT needs a ledger of things”, asserts Cisco and Airbus also follows suit with governments joining chain of things. Every major IoT/ IoX stakeholder is harping on blockchain to be the magic bullet. But latency of blockchain is a major issue when IoT devices like robotic autonomous cars demand processing speeds in milliseconds. We solved that latency problem and making blockchain fast enough for fast moving IoT devices.

Our Solution: ORIOX (Open Registry for Internet of Everything)

IoX is a huge ecosystem to play, and there will be thousands of manufactures manufacturing billions and trillions of connected devices, multiple platforms, multiple connectivity options, and many versions of Blockchain protocols. Experts predict it will be 10 times bigger than Internet itself. The real challenge is not around the technology, but a mutual acceptance from the entire IoX ecosystem. That process of consensus building has to start at some point. And we believe the first step in building an open device ecosystem that freely and securely interacts with each other is creating a platform-independent Open Registry for Internet of Everything (ORIOX). ORIOX deploys blockchain for generating and registering cryptographic address of things (CAT) and securely authenticating the veracity of the device/thing to any of its peers using digital signatures based on public key cryptography. Since ORIOX blockchain protocol is governed by the secp256k1 ECDSA standards the range of valid private keys are compatible with all the different known blockchain protocols. So the diversity of platforms and protocols shouldn’t be a problem in future. 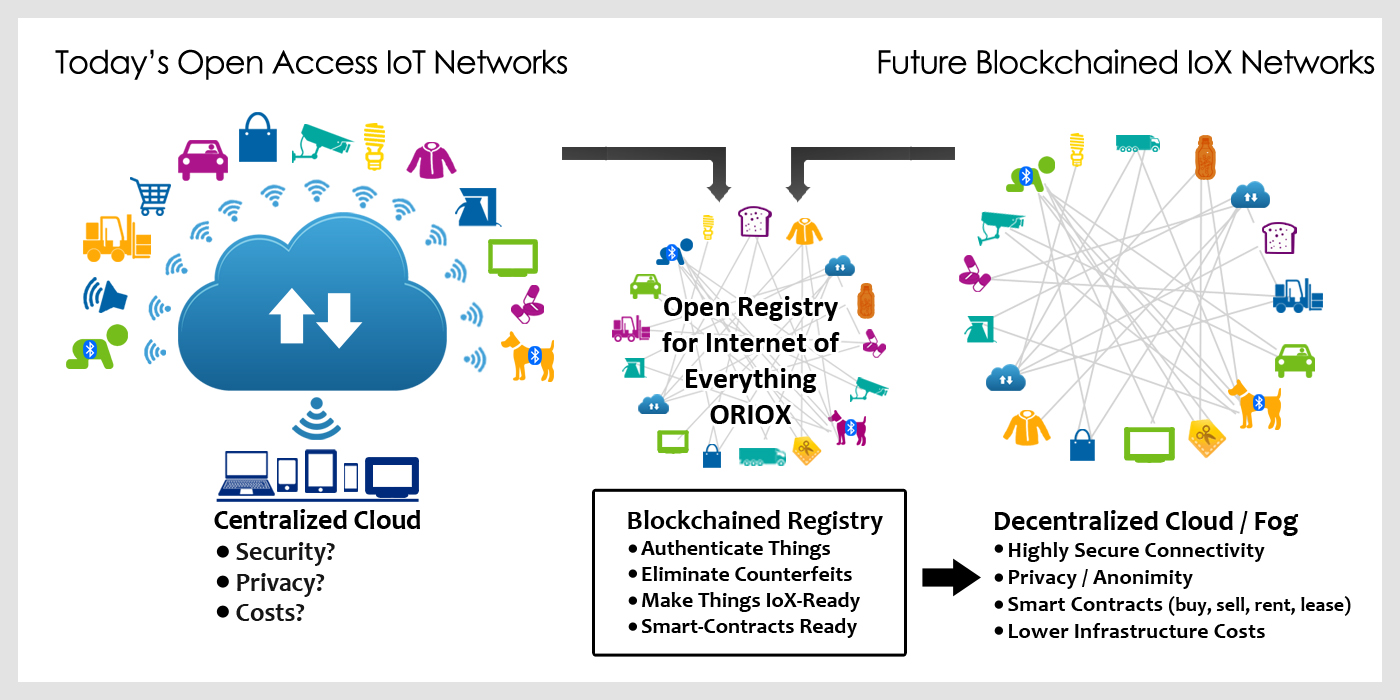 Even things other than current IoT devices, such as consumer goods, luxury items, and collectibles can be registered by using NFC, BLE or even QR Code tags. Hence ORIOX can also become an important tool for securing the authenticity of branded goods saving legitimate brand owners billions in lost revenues on account of the flourishing $461 Billion counterfeit industry. As ORIOX enables smart contracts it can also become a platform for buying, selling or transferring ownership of registered consumer goods safely and securely.

In conclusion, the fastest way to building safe, secure and hack-proof IoT is to get started with ORIOX. Using our ultra-low latency Blockchain and cryptographic addresses for powering IoT is like doing what HTTP and URL did for the World Wide Web when it was born in 1989.

Although there’s no way to assess or make future predictions on how a cryptocurrency trades in future, precedence is a good way to make a fair evaluation of future mining and trading potential of a coin. The overall quanta of mining/trading profits depend on the volume of transactions that a coin can potentially enable. As stated earlier IoT is evolving into a $19 Trillion industry with over 13.4 Billion devices already connected and talking to each other, but always under threat of being hacked. In comparison, presently there are a few thousand users of Ethereum, and Bitcoin users are also not expected to exceed 5 million by 2019, but their combined market cap is about 90% of the total cryptocurrrency market cap of $12.17 Billion. As another example, the Internet currently comprises of just over 1 Billion websites, nowhere close to the population of the IoT devices. Registering a device will be free as against the costs associated with creating and hosting a website. It is not inconceivable that IoT device manufacturers will start registering their devices with ORIOX before shipping their products. Just a tiny fraction of IoT devices registering with ORIOX would generate millions of mining rewards greatly influencing the demand for our coin thereby impacting its trading volume and price. Additionally, to handle large volumes of IoT devices, ORIOX may crowdfund a DAO (Decentralized Autonomous Organization) by issuing tokens that may further boost the value of our coin.

The ICO will be hosted on OpenLedger using ICOO’s suite of crowdsale services, which includes the OBITS bloggers club, the BitTeaser advertising network, and CCEDK, a fiat gateway. This will maximize our visibility within the blockchain community.

Funds received from ICO token sale will be used primarily for further development of the Open Registry, including the upcoming updates, development and design of new user interfaces, technical implementation, testing, registry optimization, and for marketing purposes. The funds will also be directed at expanding the team and for remuneration of BIOX employees, administrative and logistics costs, legal fees and operating expenses for current and future challenges aimed at the effective development of the ORIOX platform. Only _tokens/coins (Xent) will be available for sale, which represents _% of the total eventual supply of _ million tokens/coins. Issuance for the remaining __% will be limited and locked in smart contract pool and NOT owned by ORIOX/BIOX, which means there will be a very low circulation from the initial distribution and a total of _ million tokens will ever be created. These additional coins will be mined and distributed as rewards to the users.

Rewards for referral during the ICO stage will be announced shortly.

Funds raised will be stored in a multi-signature account (e.g BitGo for BTC), to be released to the development team according to these guidelines: 50% after the crowdsale, 25% after the launch of Xent trading on an Exchange, and 25% on the launch of the ORIOX/Xent Mobile App.

Additional features will be described in the official bitcointalk announcement, and a white paper will be released shortly.